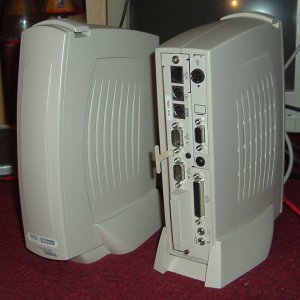 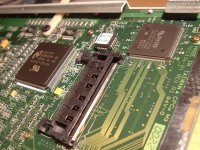 On the right you can see what the machine looks like from the outside. As you see it's a pretty small device. Normally they run Windows CE with RDP (Microsoft Windows Remote Desktop) and ICA (Citrix) terminal clients plus serial terminal software, and it's also possible to install MSIE4 to browse the web. However, that's all. It can't work as an X server, so in non-Windows networks it's not very useful.

The hardware seems to be pretty suitable to run Linux. From the outside you can already see some connectors that probably remind you a lot of regular PC's. And when you look inside you'll indeed find a Cyrix/NS MediaGX chipset with a 166 MHz x86-compatible CPU, 32 MB RAM and 8 MB of flash.

With only 8 MB of flash, it's pretty obvious that we'll have to depend on network-booting if we want to run Linux on these, certainly because we're not even sure if we can use the Flash memory from Linux.

Anyway, let's take a look inside. On the right you can see the mainboard. In fact there's not much else inside the box. Nothing interesting, at least. What you can see is a regular SODIMM socket, a PCMCIA socket, a (passive) cooler probably covering the CPU. And, well, look for yourself if you're interested.

In case you wonder, the ISA-like connector is, as far as we can know, used to connect to the video connector and to get the power. The machine also supports soft-poweroff, it'll be interesting to see if this'll also work with Linux.

There's also something on the back. As you can see this looks a lot like a CompactFlash socket. However, we don't know if it's completely CF-compatible. The machine refused to boot with a CF-card from a digicam installed. Maybe the card should be formatted in some special way? Anyway, for now we'll have to live with the 8 MB of flash built-in.